Here you can find out about all the horses and ponies currently with us at the centre, if you would like to sponsor one of them please visit the sponsor a horse page. 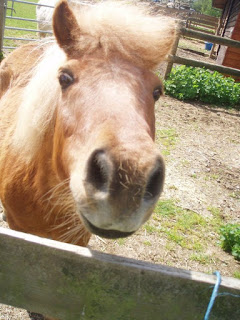 Cracker:
Cracker was rescued as a tiny 14 month old foal, severely under-nourished and infested with worms , after being ridden by youths at a horse sale. At first Cracker had to be hand- fed, he was so lethargic and weak. Once he had regained his strength he became a happy and energetic foal, very mischievous and into everything!.
Now in his late teens Cracker is a very handsome boy, and still very mischievous! He enjoys spending time out in the paddock with Molly and having a good race around in the winter. If he manages to get hold of anyone elses' empty feed bowl after breakfast he will roll in it which will always make his carers laugh. 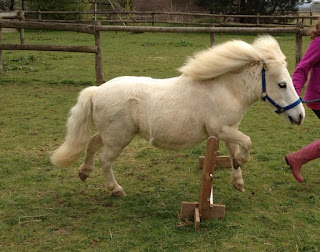 Molly:
Molly is a small grey Shetland Pony who came into the centre in 2005  with another pony after her owners were prosecuted for neglect and banned from keeping horses. She has been left with  a permanently fat-looking belly as she had previously had a foal which may have laid awkwardly and stretched the muscles. Also her feet had been left to get so overgrown she could barely move at all.

Molly enjoys any kind of attention, especially if treats are involved, whether it be grooming, having a bath, getting her clip for winter or going for a run round the paddocks with one of her carers. Molly is best friends with Bilko and as you can see the two of them enjoy a good muddy roll when they get the chance! 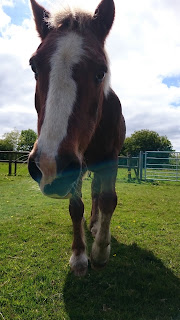 Bilko:
Bilko is an elderly pony who came to the centre in November 2013 after spending most of his life in riding schools. He was kicked in the shoulder by another horse at a riding school, causing a fracture which has not healed properly. Because of this his owners signed him over to The Horses' Voice with very overgrown feet, bad teeth and a very thick coat full of old sweat.
It was found that Bilko had Cushing syndrome when he arrived and had to have all of his thick sweaty coat clipped off to make him more comfortable.
We don't think Bilko realizes he's an old man now and leading him out in the morning is like leading a racehorse, he will jog next to you all the way to his paddock and then race off as soon his head collar is removed. 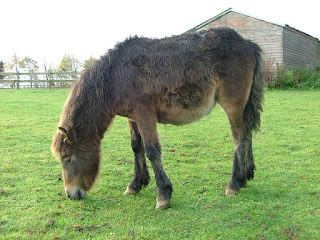 Faye and Lily:
Faye and Lily were among a group of foals rescued straight from dartmoor as they were rounded up to go for meat. They came to the centre at 6 months old in November 2011, along with two other dartmoor colts.

Faye (left) is a very intelligent pony who loves her work and also her food, she only has to look at a blade of grass to put weight on, poor girl! Faye loves water and will happily splash about in all the puddles while out walking as well as enjoying warm summer baths.

Faye attended her first local show in the summer of 2014 coming away with two 2nds and a 1st, we were very proud of how well she performed. She has grown into a very pretty girl who is now loved very much by a little girl in her forever home. 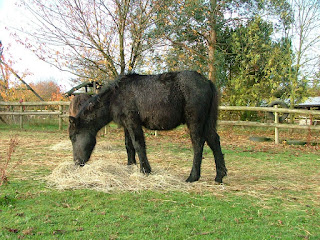 Lily:
We could see from the moment Lily arrived she was born to be leader of the herd, she has true dartmoor qualities and strong matriarchal instinct. Lily takes very well to all her work and would make a very special pony for someone.
She loves being groomed and pampered and is very good at keeping her little herd in order. 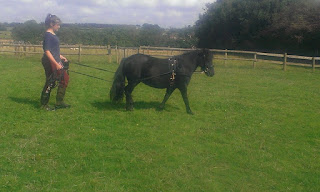 Both Faye and Lily were backed to be ridden in summer 2014 and have been kept in light work since. Lily is now looking for her forever home and would be a fantastic driving project, she already long reins really well!
If you are interested please get in touch via email at: thehorsesvoice@Hotmail.co.uk or through our facebook page. 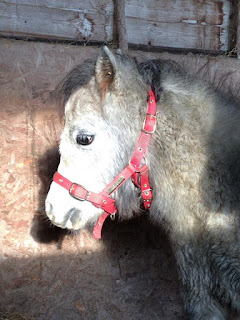 Sally:
Sally was rescued along with her mum in autumn 2012 at only 9 weeks old and close to death. Her mum could not produce enough milk as she was severely emaciated and so Sally was very undernourished and had constant diarrhea. She had sores on her back legs from the build up of faeces and was very weak and lethargic, spending most of her time lying down.
Sally was fed a special diet, including milk pellets and electrolytes every 4 hours and was cleaned up and had her sores treated. After a few weeks her condition improved, she was exploring the padock and bouncing around like a foal should. 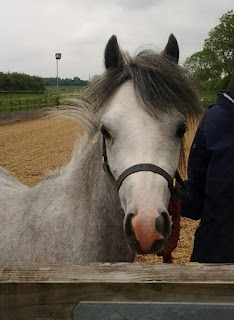 Sally was weaned from her mum at 6 months old and joined Lily's herd with Faye. She is a very petite pretty pony with lovely movements who would do well in the showing ring.

She loves having a race around the girls paddock and is very fast on those little legs! 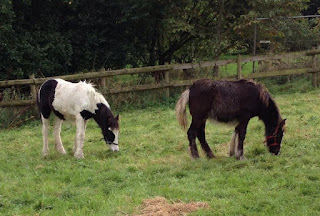 Warrior and Thistle:
Thistle (left) was born in autumn 2013 and rescued when he was found dumped in an unfenced field on New Years Day 2014. He was only 3 months old and covered in thistle burrs from his ordeal hence his name.
Warrior (right) was one of 11 foals rescued from a muddy pen in October 2013. He was full of worms and lice and completely emaciated to the point where he resembled a skeleton under a wooly coat.
They were both gelded as soon as they were strong enough. 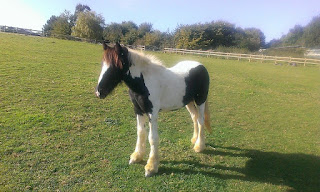 Thistle was treated for intestinal inflammation caused by the amount of worms he had and made a steady recovery. Now nearly 2 years old he is a very affectionate and playful boy who loves picking up every item of the grooming kit in his mouth, chewing it then hurling it as far away as he can! He gets on very well with Jango and the 2 of them play together a lot, they're the naughty boys of the herd. Thistle has now found a loving home and went to live with his new family on 2nd July 2016! 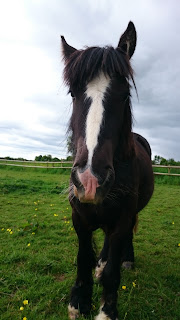 Warrior has grown into a very handsome and heavy-set boy and has kept his beautiful flaxen tail. He is the most mature member of the herd and will keep the others in order if play gets too rough. He and Thistle like to play a game of biting each others legs and when he has had enough he will just lie down, nearly on top of thistle! Warrior also loves to tip the wheelbarrow over when he comes to his carers for cuddles in the morning. 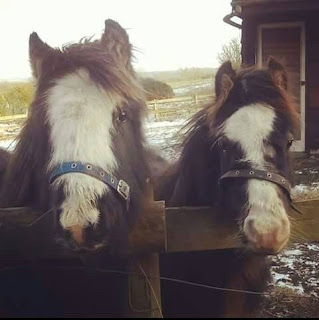 Jango and Buddy:
Jango and Buddy are our newest arrivals having been rescued in January 2015 along with Spirit. The three of them had been dumped in a ploughed field in the middle of winter, too young to be separated from their mothers and unable to take care of themselves.
All were in awful condition when they came to us but poor Spirit was worst of all, he had diarrhea covering his back legs and was no more than skin and bone. Sadly after 5 days of round the clock care he passed away surrounded by his carers.
Buddy was very close to the same condition Spirit was in when he arrived and if they had been left any longer he probably would not be here today either. 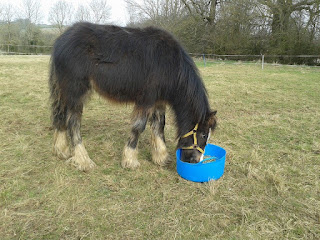 Buddy:
When Buddy first arrived he was so wooly from all that time out in the cold it was hard to see he was no more than just a skeleton underneath. He had bald patches all over his face from undernourishment and he long coat was all matted. 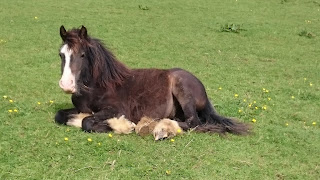 Buddy was very lethargic and weak when he first came in and it took a long time for him to fully recover but after much careful treatment he is now a picture of health. He is the smallest of the herd and is very good friends with Warrior who took him under his wing when they first met. Buddy can be very cheeky and is a very handsome boy, we believe he may have some welsh cob in him, and would look very good at the shows. 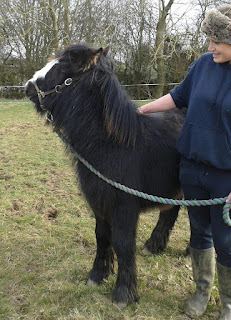 Jango:
Jango was so hairy when he arrived he could barely see for all the fluff on his face! Being the biggest he had taken charge of the herd and become quite aggressive in his attempts to try and protect them, being quite difficult to handle for a start. He was also very thin and the pair had to be trickle fed for a start to avoid colic. 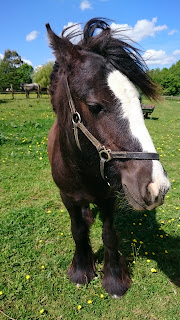 It didn't take long to win him round though, and now he is normally first over for cuddles in the morning. Jango absolutely loves having his back legs scratched and will reverse up to you in an attempt to get what he wants.The old aggressive personality has completely disappeared now we have earned his trust, although he still looks out for Buddy in the field. He and thistle love playing together, chasing each other round and behaving as happy healthy foals should.
Jango was rehomed on July 4th 2016 to one of our team, Kate, he is thoroughly spoilt and is settled in with his new friends very well, still a very cheeky chap! 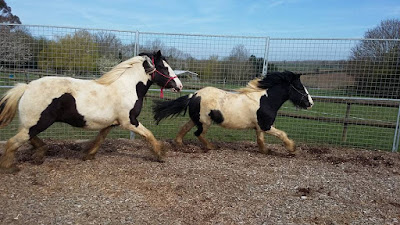 Barney ( Barney Rubble) and Thunder arrived together in January 2016. They had had some handling and had been living in a herd with other geldings the same age. They are 2 years old. 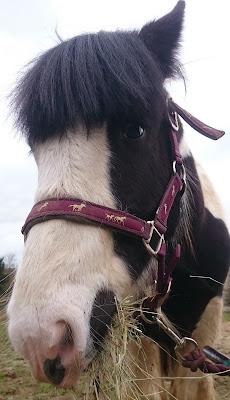 Barney:
Barney is a very sweet boy who is quick to learn and always eager to please. He is the biggest of all our baby cobs and a real softie. Barney came to us a little overweight and it became apparent he has locking stifles. We have just started Barney on an exercise programme appropriate to his age to help build up his muscles and manage his problem.

Barney especially loves having his head and ears rubbed and will practically fall asleep from being so relaxed. He does have a cheeky side and can be quite stubborn when the mood takes him!
Barney was recently rehomed with a lovely family after successful physio for his locking stifle. He has now been backed to aid his muscle development and enjoys hacking. 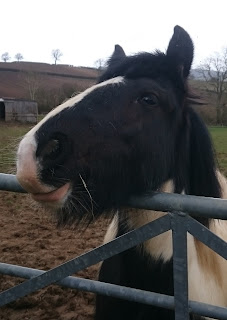 Thunder:
Thunder is quite a reserved and sensitive pony and quite similar to Thistle in both looks and personality. He loves to play and will often pester Barney until he joins him for laps of the field!

Thunder loves being groomed and will stand happily to have his belly scratched! 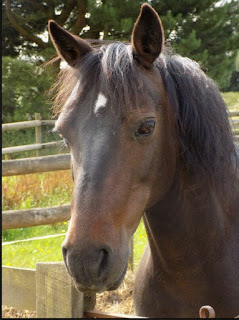 Beau:
Beau came to the centre in autumn 2014 after she was abandoned at a livery yard with very overgrown feet ( see picture below) and very overweight. Because of this she had chronic laminitis and is currently undergoing treatment for pedal bone rotation. She was also found to have EMS and cushings which she was being treated for.
She was a very sweet natured and well behaved girl who is unfortunately left with these health issues due to the previous state she was in.
Unfortunately even with all the treatment she was receiving Beau was still in too much pain with her feet to continue, she was put to sleep in winter 2015 with her carers by her side.

New comments are not allowed.